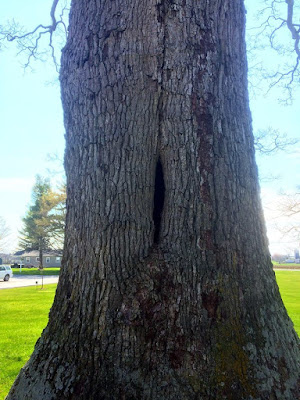 Alzheimer's was an asshole. George was ninety-seven years old now. He had forgetten his wife, his children, his life. But he somehow still remembered his tree.

His family used to freak out when he'd disappear, and they'd find him there, a quarter mile into the woods. Over the years he outlived them, or they stopped coming around. He didn't know which. Eventually he forgot all of them. At this point it was just the daily visits from Hospice. George was alone.

Nobody was stopping him from going to the tree. If he wasn't home when Hospice arrived, they'd leave the food and magazines on his porch. He'd wander back around sunset, then wonder where the food and reading materials had come from.

Ninety-Two years ago at five years old, running down what was now an old (no longer linked) section of the Appalachian Trail, he had gotten away from his mother while chasing a rabbit. The sun was setting. The trail lost behind.

The formation of bright pinpoint lights had appeared, circled George a few times, and were hovering ten feet away. Commander Jex and his squadron were on their way back from visiting a sister center when they'd discovered the young boy. As George looked toward the lights, an unfortunate bat attempted to attack one of the Raxor ships and was immediately disemboweled. Jex and his squadron barely noticed it happening. Nothing on this planet could actually hurt them, but they weren't heartless. They certainly couldn't ignore a human child lost in the woods, not if the child could see them. He was young enough that their sophisticated intent filter hadn't blocked him from seeing yet. That meant he was an innocent.

"Test moving towards Longrove" ordered Jex. "Slow. I want to see if he'll follow us." The formation walked backward slow, closing the 25 meters left to Longrove. George followed the lights, carefully picking his way through the underbrush. They arrived at the base of an enormous tree. The lights walked him towards a tree section that started shimmering and became an opening just big enough for a George. George walked inside. Jex and his Raxor fleet headed to the treetop to dock.

From the outside Longrove looked like a beautiful three-hundred year old oak tree. But inside? The tiny room George walked into had gotten very big very fast. Jex met the boy after both of their ingress processes finished on the ground floor of the 3000 story interior. They were now the same height but one had a 5 year old boy body, and one had what looked like a grown man body, but only boy height.

"You are short" said George. Jex smiled. "We are all the same height here. It's a lazy thing the tree does that nobody minds so we left it that way. You got lost in the woods?" "Yeah." said George. "I like your tree. Are all trees like this?" asked George. "Not all of them. Hey, come meet my family." They went to the nearest wall transport. Then they were going up very high very fast. Jex was just a pilot so lived on one of the higher floors.

What began that day was the best summer of George's life. Any time he could, he'd sneak away from his mother to play with Jex's kids. He loved Gwince and Tarish like sisters. "Do you worry he'll talk about us?" had asked his wife Yandla. "No, and it wouldn't matter. He's just a boy. The intent systems would kick in and he'd no longer see us or have access. Nobody would believe him."

But that's what happened. He told the whole story to his cousin while going trick-or-treating for the first time. The lights and the door to Longrove vanished. Jex was very sad. So were his children. He'd get permission to take his girls with him on his ship to look in on George once in a while, but rules were rules. George had tried everything to get back into the tree, but the filter had another side. You'd slowly forget all about Longrove.

He'd forget for 70 years, then suddenly it was almost the only thing he remembered as the Alzheimer's ate away at the protective layer of intent filter left behind by Longrove. And now 92 years later, George finally saw the tiny lights around the tree.

"He can see us!" cried a now adult Gwince, captain of her own ship. "Go get him. We can restore him with the imprint in memory." said Jex.