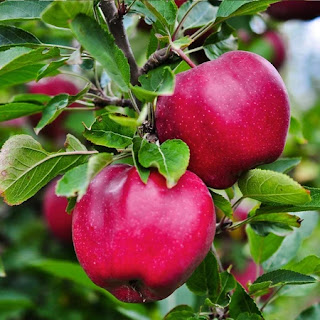 Jasher had a sense of humor.

You go insane. Then you go sane. Then you are crazy again. And after the 50 millionth year you write a book. It's just something that happens.

You joke about it with Kay and Boaz.

Ah.... the best way to survived crazy is with help.

Jasher had none at the moment.

He did this on purpose.

If he had to do work that was truly dark, he'd make an excuse and leave Kay and Boaz out of it completely.

The true fun of being truly temporal is this happens. You end up stranded, alone, in a Universe that contains little more than a planet, a bunch of very beautiful apple trees, and an exploding Universe.

"Apples are all about storage and pectin." Jasher said to absolutely nobody, as he marveled at the beautiful blue trees with huge red apples. Other than these trees, he was literally the only existence left in a collapsing Universe. If he was very lucky, he'd only be stranded about fifteen million years.

This was nothing new. He had done more time than this before. Jasher carefully bookmarked the last 15,932 interactions he had with Kay and Boaz that were relevant to progression. He'd forget them all after ten thousand years or so. He'd have to go back to them at regular intervals. Again, not Jasher's first rodeo.

So... completely stuck. Sure, you have redo forever, and wide temporal steering, you don't end, and archive access is amazing. Imagine having 50,000 versions of the song Smells Like Teen Spirit. That will easily kill a year. The Multiverse is a lot of things, but it's not boring. But, even after you've watched all 20 Seasons of Hardcastle and McCormick from the Universe where it was the amazing show, and not Magnum P.I. (And Jasher did. It was a truly amazing show with different writers) He still hadn't even put a dent into the very real twenty million years this would take.

He knew to the millisecond how long it would take before Kay and Boaz would wonder where he was. And he knew he was looking at twenty million years this time.

You don't get to cheat. You have to do the time.

Sometimes a Universe has to end. Specifically, if it is interfering with neighboring Universe. Jasher did the hard work, and evacuated all the sentient beings that were not trash. That relocation effort took an easy thousand years of felt time. Sure, he was very good at it after so many times, but it was still a solid thousand years of nonstop work. It was done though.

Once the "folks" were evacuated (people that just want to live and let live. Most of us.) their terrible leadership was all that was left. Jasher could safely end their Universe, but at a cost.

He couldn't be absolutely sure all their slave factory, and genetic harvesting operations were gone without a perfect collapse that he had to monitor in real time to make sure nothing survived.

He accomplished this in a dickish way by creating an object so massive in the very center of their Universe, that it immediately halted expansion. Very dick move, but they totally deserved it. They had been obliterating nearby Universe with the full knowledge they were doing it. They simply didn't care.

Jasher said forcefully, then redid the last ten season of Hardcastle and McCormick again. Just so good. Then he did Buffy and Farscape and did Time Traveling Bong (again), then started on a favorite when the small planet he was on suddenly had a Boaz and a Kay.

Jasher had literally made a cyan colored sofa, pulled in a copy of his favorite huge Sony Trinitron from the 1990's, and was bundled up in blankets when Boaz and Kay just appeared out of thin air, blocking his television.

"Move" said Jasher. "Colonel O'Neill is about to tell Carter he loves her."

"We put a tracker on you this time. I asked Boaz if it was possible to catch up to you after you were done. He said it could be done if we just put monitors on the Universe itself and waited for it to die. I didn't believe him." said Kay solemnly.

Jasher burst into tears. Kay hugged him hard. She knew how hard it was for him to destroy anything. After a few months Jasher was "normal" again.

They handled the twenty million years like it was nothing together. When it was all said and done, and they were able to travel again, Jasher still chewed them out for interfering. He was trying desperately to spare them from the darker stuff.

April 26, 2019
"Don't you know that a star burns best?" "You think I'm lying" said Jasher plainly. "I tell you what. You don't have any concept the energy it costs to do what I've been doing here forever. I'll turn the shit off. I warned you. God, I wish Kay was here to see this." Wolf News main anchor, Bret Starling was ready. This was his moment. The moment that would define his entire career. The guy that had just appeared out of thin air an hour ago was the one Washington called about that could just show up and get right past security. The guy that put the space ship in front of the moon. It was later explained that he hacked the satellite feeds. This guy was a super hacker. If he was careful here, he'd win a daytime Emmy. Suddenly, next to the hippy looking hacker guy, out of thin air was... no other way to say this, what looked for all the world like Audrey Hepburn. Just, boom. One second nobody, the next, there. Ah, t
Post a Comment
Read more